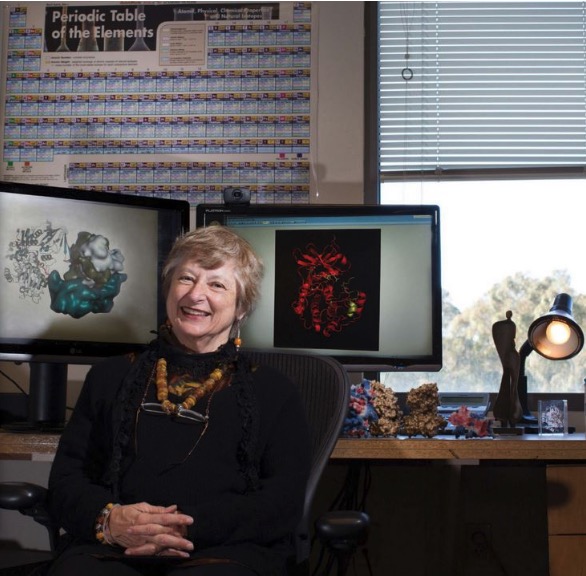 The walls in the office of chemist Susan Serota Taylor, Wisconsin, at the University of California, San Diego, are filled with art and photographs that offer glimpses into her personal and professional life: vibrant snapshots she took of everything from wild poppies to heirloom tomatoes to family members. A framed illustration that could be mistaken for abstract art depicts a cluster of red ribbons coiled into cylindrical shapes, loosely connected by red and gold threads and punctuated by white spheres.

Yet this compelling image isn’t mere office décor. It’s a model of protein kinase A, or PKA for short, a tiny molecule too small to be seen by the world’s most powerful microscopes. Solving and modeling the crystal structure of this kinase, which helps regulate functions in every cell of the body, is Susan’s most significant contribution to chemistry.

Susan’s groundbreaking work on the structure and function of kinases—which has laid the foundation for drug research to ameliorate diseases from cancer to Alzheimer’s—has made her one of the most distinguished chemists in America. She has been a professor of chemistry, biochemistry and pharmacology at UCSD for nearly 45 years. Among her many accolades, she is an elected member of three national science academies, including the National Academy of Sciences, the National Academy of Medicine, and the American Academy of Arts and Sciences.

Perhaps the most remarkable thing about Susan’s extraordinary career, however, is that she never intended to have it…

Continue reading the full article in The Key